Free Shipping on Orders Over $50!

Quite the Laborious Labor Day in Bishop, CA

Mountain ranges aren’t a common site in the east coast. Moving out west, I was constantly amazed and bewildered at how beautiful it was simply driving on major highways, like the 101, despite the heavy traffic LA is known for. Within a few months of west coast living, I decided to take a solo trip to Bishop, CA for the long Labor Day weekend, as I’ve heard so many great things about climbing at the milks, the Happies, and the Sads.

The drive up to Bishop is definitely one of the easiest drives; 200 miles of a straight path on the 395, guided by the remarkable stretch of the Eastern Sierras.  The hardest part of it all is trying to keep your eyes on the road.  I passed through several quaint mountain towns, but nothing was quite like Bishop. As you enter the town, you’re greeted by their welcome sign and a random golf course to your left (if you’re coming from the south). I stopped in the local coffee shop, The Black Sheep Coffee Roasters, so aptly named, as much of the coffee addicts in there were rock climbers decked in brands such as Patagonia, La Sportiva, Prana and Columbia to name a few. From that moment, I knew this was definitely a climber’s haven. As I waited for my morning coffee, I heard climbers chatting about what they wanted to get on, where they wanted to go, and talking through beta, determined to send their projects. I met a fellow lady climber who, after playing a short game of 6 degrees of Kevin Bacon, is good friends with another climber chick one of my friends from NJ knows, reaffirming how tight-knit the climbing community really is. After some small talk, I grabbed my coffee and we parted ways.

Early September is definitely nowhere near peak climbing season out here in the west, but I was there and temps were good enough, as long as you got there early morning, or later in the day. I headed to the infamous Buttermilk Rd, eagerly looking for the Peabody boulders to greet me, letting me know I’ve reached my destination. I met a few French-Canadian climbers at the parking lot who seemed just as lost as I did, but super anxious and excited to climb. When the blazing sun stole most of our energy, I headed back into town to check-in to the Hostel California, the local climber/hiker/adventurer’s on-a-budget place to stay if you’re not planning to camp out. The vibes of the hostel are exactly what you’d expect if you’re familiar with what it’s like to be in the climbing community; very welcoming, cozy, eccentric and totally laid back.  It also serves as the perfect place to find some climbing partners for the day, if you happen to be solo on your trip.

Once the sun was down, and temps dropped, it was the perfect time to head out for the second half of the day.  I met and climbed with someone doing a work/study at the hostel, serving as the perfect guide to showing me the classics at the Happies.  There’s a great sign on the road going to Happies that marks a town in Massachusetts being only 3000+ miles away! 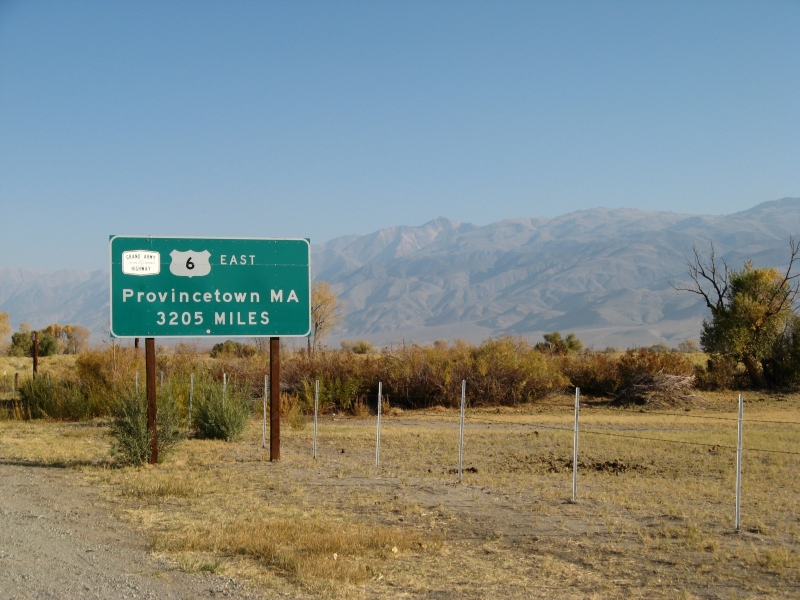 Buttermilk Rd can be… not-so-gentle on your car.  If you miss the parking lot on the right, the road gets a bit hairy. A local tow was coming from the opposite direction of where I was going and warned me about the road up ahead, casually mentioning the Chevy Tahoe who’s got a blown out tire a quarter mile ahead. After hearing the disconcerting scratching under my car and seeing the Chevy Tahoe myself, I turned back around and pulled into the parking lot I passed up as I tried to ignore the rattling under my car that wasn’t there before.

After a slight panic, I decided to deal with it later on and just climb. Labor Day came and I had to drive back 400 miles home, knowing there’s a 200 mile stretch on the 395 where there is little to no service. If my car broke down, I’d be in quite a sticky situation. In my sheer desperation, I called several shops with no luck but a voicemail telling me they were closed. I found Warren’s Auto-Repair on my map and hoped someone would be there. To my luck, there was, but the mechanic, Warren, disappointingly told me they were closed. However, the kind-hearted soul that he is, asked me what I needed help with.  I told him what happened to my car and he didn’t hesitate to check it out on his off hours.  He fixed what was making the rattling sound and assured me that my car was fine. I chatted with him for a moment, appreciating his good samaritan act of the day, and gave him a hug to thank him for taking the time on his day off to help me out.

Bishop is an amazing little town, packed with some of the friendliest, good-natured souls, stellar climbing, and beautiful landscapes that always make coming back home a little bit more difficult each time.